Hongkong. I didn´t know anything about this city except the fact that they can use Google and China can´t. Honestly it was not even part of my planned trip. When you book an around-the-world-ticket you usually can only flight in one direction and when you look on the map, Hong-Kong is geographically “behind” Denpasar (Bali,Indonesia) when you´re flying to Sidney (Australia). But my travel agent told me I could go there because on some dates there´s just a flight to Sidney with an stopover. And I could extend my stay in the stopover destination as long as I want. So I said “Why not?” and didn´t regret it 🙂

So after 8 weeks traveling in Indonesia I arrived in this really fascinating city. It was one of the only citys where I couldn´t find a couchsurfer to stay overnight. Probably because Hong Kong is counted amongst the most densely populated areas of the world. It also has the most skyscrapers (classified as building with more than 14 floors) in the world; double that of its nearest rival: New York City.

But luckily I´ve met a couchsurfer friend of a friend from Bali and we went for street-food dinner and beer together when I arrived. He also organized me a (for hong kong standards huge) private room right in the city center for around 10$/night.

The next day I explored the city like always: Walking around the whole day with no plan around to get a fist empression of it. What really surprised me was that you can walk one hour from the busy city center to the quiet hills and enjoy the nature for a couple of hours with not even seeing the metropolis.

Open spaces – woods, mountains, beaches, wetlands – make up 73% of Hong Kong’s area, and country parks protect 40% of its land. There are more than 300km tramp treks around and if you stay there for longer I recommend you to look for them here .

What I also found out through chatting with another couchsurfer was the fact, that Hongkong has more than 20 official (and beautiful) beaches. So the next I was going to “Shek O “. It still had 25° C in November (autumn/winter) and and there weren´t many people. The water temperature was quite moderat and there were some rocks for free climbing as well. A list of the Top 10 around Hongkong,from turtle to surf beach, you find here. 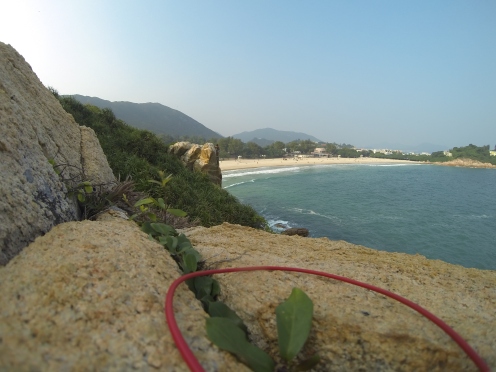 Rock Climbing near the beach

I don´t know any other Megapolis where Nature and City are mixed that much. Nowhere the contrast is that strong. Noisy, busy, grey on the one side, calm and green on the other side.

So when I finished my beach day, I went back to spend my last night camping in the City Center between all the skyscrapers. But thats another story….